Kitsap Transit is a public transportation agency, based in Bremerton, Washington and serving the county of Kitsap, which operates routed bus service, foot ferry service and service for elderly and disabled passengers. The agency has long been concerned with preventing engine failures and optimizing maintenance schedules for its fleet of approximately 362 pieces of equipment including transit buses, cutaway small buses, vans and three passenger only ferries. 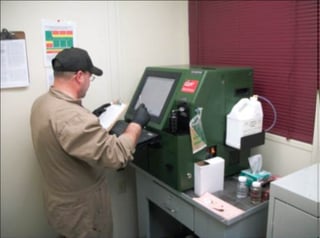 Previously, the maintenance department monitored the engines of vehicles in its fleet by sending oil samples to an outside laboratory. The analyses provided measurements of heavy metal content, fuel and radiator fluid contamination, etc. The problems with this approach were cost and time: it cost $40 per sample using a third party lab, and it took 14 to 21 days to receive the results. The cost limited the number of samples that were analyzed and the lead time created the possibility that a failure might occur before the results were received.

Kitsap Transit purchased an OSA4 TruckCheck® automated oil analysis system from Spectro Scientific in 2014. The system enables the maintenance team to perform on-site analysis of oil samples previously done in the lab including Total Base Number (TBN) results
for less than $1 per sample in less than 15 minutes.

“Bringing oil analysis in house made it possible to begin analyzing all of our bus engines on a regular basis,” said Dennis Griffey, maintenance supervisor with Kitsap Transit. “Within the first few months, the analyzer identified two engines that were close to failure. We saved about $40,000 by eliminating the need for an out of-frame rebuild in one case and by getting the rebuild done by the dealer as part of the warranty in the other.”