The 37 service technicians employed by the City are responsible for maintaining the vehicles and equipment used by the City to patrol its streets, fight fires, maintain streets, bridges and other public property, provide fresh water and other general functions. The City recognized the value of oil analysis years ago as a way to maintain the equipment critical to their city operation. About five years ago, the City contracted with a testing laboratory for oil analysis and received the test results in about six days. At its peak, the City sent 4,500 samples per year for analysis at a cost of $6 per sample.

The City achieved considerable savings by increasing oil change intervals on larger equipment but the lag time between when the samples were collected and when the results were received limited the value of using an outside lab. Switching from mileage-based to condition-based oil change intervals required that vehicles be brought into the shop twice – once to draw the sample and a second time to change the oil, if necessary – so oil analysis could only be justified for vehicles with large oil reservoirs. The cost of the analysis was another limiting factor to expanding the sampling program. The fact that the lab did not provide a historical record of the results for each vehicle also made it difficult to identify problems such as when the metals content in a transmission oil suddenly rose above its normal range. 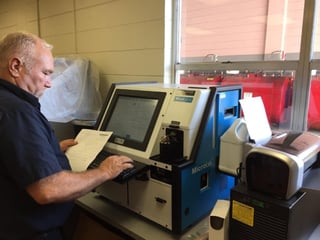 The City’s Operations Manager had experience in the military using oil analyzers. He felt the City could benefit from owning and operating its own analyzers so any required maintenance or repairs could be performed immediately after analysis. The Operations Manager also believed in-house oil analysis would reduce analysis costs, making it possible to test more vehicles and equipment to achieve greater oil change savings. After researching the leading oil analyzers on the market, the City selected the MicroLab® lubricant analysis system from Spectro Scientific because of the instrument’s ease of use.

All the user has to do is insert a sample, input some basic information about the oil and equipment and the instrument performs up to four different types of analyses. These analyses provide a complete picture of the oil and powertrain condition.

In less than 10 minutes, the instrument provides complete test results with color coded alarms and maintenance recommendations. The City also purchased the optional LubeTrak® data management system from Spectro which organizes test data for easy viewing of history and trends across the entire fleet.

Oil analysis is now performed on every engine or transmission with five quarts or more of oil during a preventive maintenance inspection. The cost of performing each analysis has been reduced to $1.78 making it economical to test even the smaller vehicles. The number of samples they planned to run prompted the Operations Manager to purchase two MicroLab analyzers to prevent any wait time for the technicians. The service technicians were trained how to use the results and maintenance recommendations provided by the analyzer to determine if any maintenance needs to be performed and when the vehicle should next be tested. If the analysis shows the oil and the powertrain are in good condition, then the vehicle is sent back into service without any maintenance required, saving the cost and time of performing unnecessary labor. 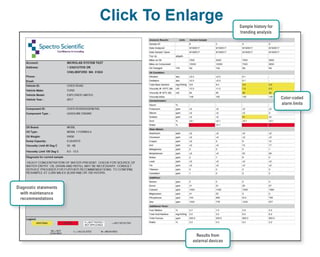 On the other hand, if the oil analysis shows there is a problem with the oil or the powertrain, the work is performed immediately. This avoids the need to recall the vehicle a second time. With in-house analysis they no longer have to wait six days for results from an outside lab, which eliminates the possibility of the powertrain incurring further damage while they wait. Service technicians have been trained to use historical test results as part of their maintenance practices to determine when the equipment needs to be tested again. The oil analysis trends, such as a decrease in additives or an increase in wear metals, help the technician estimate when the oil will need to be changed.

In the past, it did not make sense to test the oil in police cars because each test required that the officer bring the car into the shop and then back again later if maintenance was needed. This process took about two hours of his or her time. After implementing on-site testing, the oil change interval on the City’s fleet of 800 police cars has been extended from a uniform 2,500 miles to 8,000 miles on average.

Oil analysis also saves money by identifying a problem before there is a catastrophic failure. For example, oil testing on a Chevy Impala police vehicle showed water in the oil with a volume that could not be detected visually. Technicians performed a pressure test on the intake manifold and found it was leaking. Repairing the manifold early helped avoid a much bigger repair bill and possibly avoided the replacement of the engine. Oil testing on another three-year-old police vehicle showed large amounts of metal particles in the oil. The Fleet Management Department got in touch with the manufacturer who replaced the engine at no charge. If the problems had not been detected, the engine may have failed catastrophically after the warranty expired.

The experience of this Northwestern City demonstrates that oil analysis can generate a fast return on investment for a municipality or other organization with a large fleet of vehicles and equipment. By accurately determining the condition both of the oil and the equipment, oil analysis can generate substantial savings by reducing the number of oil changes required. This makes it possible to fix mechanical problems before they result in catastrophic failure. This application also highlights the advantages of in-house analysis whose low cost and convenience makes it possible to evaluate more vehicles and allows technicians to take immediate maintenance action rather than having to bring the equipment in again days later.