Certain types of samples, such as those containing detergent, may form emulsions when doing an oil in water extraction into a solvent. The boundary between the solvent and the sample will have an emulsion layer that has a cloudy or milky appearance as shown in this photo. 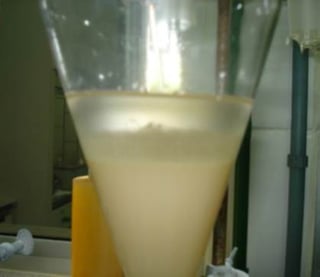 According to U.S. EPA Method 1664, “if the emulsion is greater than one-third the volume of the solvent layer, the laboratory must employ emulsion-breaking techniques to complete the phase separation.” This is relevant to all oil in water measurements that use liquid-liquid extraction whether the analysis is done by infrared, gravimetric or UV.

If such an emulsion cannot be broken by any attempted means, the test method may not give representative results for the problem sample.The best way to break or reduce the emulsion depends on the sample matrix. The following list includes some options that may be useful for reducing the emulsion enough to be able to take a valid measurement.

1. Let the sample sit. The easiest is to allow the sample to sit for up to an hour and see if the emulsion decreases. Make sure the sample is covered to reduce any evaporation of the solvent. Gently taping the side of the container or stirring the solvent and emulsion layer with a stir bar can help to speed up the separation.

2. Acidify the sample. If the emulsion is due to an alkali soap, detergent or surfactant then lower the pH to 2 with sulfuric acid, H2SO4, or hydrochloric acid, HCl, (as recommended in the oil and grease methods, mainly for preservation of the sample) will modify the surfactant’s charge so that is no longer acts as an emulsifier.

3. Add table salt (NaCl). If you know that your sample forms emulsions, you can add the salt to the sample prior to shaking with the solvent. If you are trying to break an already formed emulsion, you can shake the salt into the sample. Hopefully, you will see the salt dropping to the bottom as the droplets from the emulsion coalesce and the emulsion disappears in to cleanly partitioned layers. Sodium sulfate can also be sprinkled into the sample as described above or a more aggressive approach for sodium sulfate is described next.

6. Centrifugation. A centrifuge is the sure fire way to break the emulsion but not all labs or especially on-site facilities one available.

All of the above emulsion-breaking methods are usable with portable infrared analyzers, such as the InfraCal 2 Oil in Water Analyzers, for virtually any type of oil in water measurements, including fat, oil and grease (FOG) wastewater discharges.