Aircraft gas turbine engines use synthetic polyester fluids since they are formulated to handle a wide range of severe operating conditions. The factory supplied Spectroil M/N program for compliance to the JOAP program uses D19 and D12 standards which are prepared from a mineral oil hydrocarbon base stock. For applications which require improved accuracy for polyol ester based oils, the SpectrOil analyzer offers a new calibration program called POE8 TURBO with matrix-specific elemental standards. 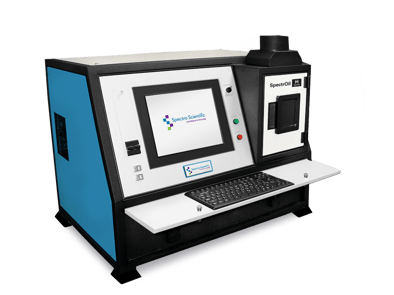 These synthetic lubricants are formulated to meet the demanding requirements of aircraft type gas turbines
operating over a wide range of severe operating conditions. They have excellent thermal and oxidation stability to reduce sludge and varnish deposits and they have a high specific heat. The lubricants also retain viscosity and film strength over a wide temperature range (-40°C to 204° C or -40°F to 400°F).

When testing these fluids on a SpectrOil calibrated with mineral based oil standards, there may be matrix
effects present from the sample which are not accounted for in standard mineral oil wear metal standards. The
SpectrOil requires no dilution or sample preparation before analysis making it very easy to use compared to ICP
methods that require a dilution. However, measuring the oil directly means the instrument is more susceptible
to differences in the spectral baseline and/or burn strength of sample caused by significant differences in the
base oil chemistry. Even though the trending capability of the calibration is maintained, a significant difference
in the sample matrix can affect the accuracy of the result. For applications where accuracy is very important or
the matrix effect is severe, a calibration using standards made in a representative matrix is necessary. AMETEK
Spectro Scientific has now developed a new calibration program called POE8 TURBO for improved accuracy to
polyol ester aviation turbine oils.

For many applications using polyol ester lubricating oils, it is important to monitor levels of certain metals below 10 ppm. This means that any method for wear metal analysis must be able to accurately determine concentrations at low levels. In order to test the SpectrOil’s performance on polyol ester base oils, test standards with up to 20 ppm of 8 different elements were made up in a gas turbine lubricant and were analyzed for wear metals. The synthetic oil type was Turbonycoil 13B, NATO code O-150 which is a polyol ester based fluid. The test standards and samples were run using the factory Spectroil M/N program for compliance to the JOAP program using the mineral oil based D19 and D12 standards. The instrument provided accurate results for the JOAP mineral oil based standards D12-5 ppm, D12-10 ppm, and D12-30 ppm (Table 1) but did not provide satisfactory results for the synthetic test standards (Table 2). It was concluded that the poor accuracy was a result of the difference in matrix between the synthetic turbine oil compared to the mineral-based hydrocarbon JOAP standards. For improved accuracy, a new calibration was developed specifically for a polyol ester matrix. 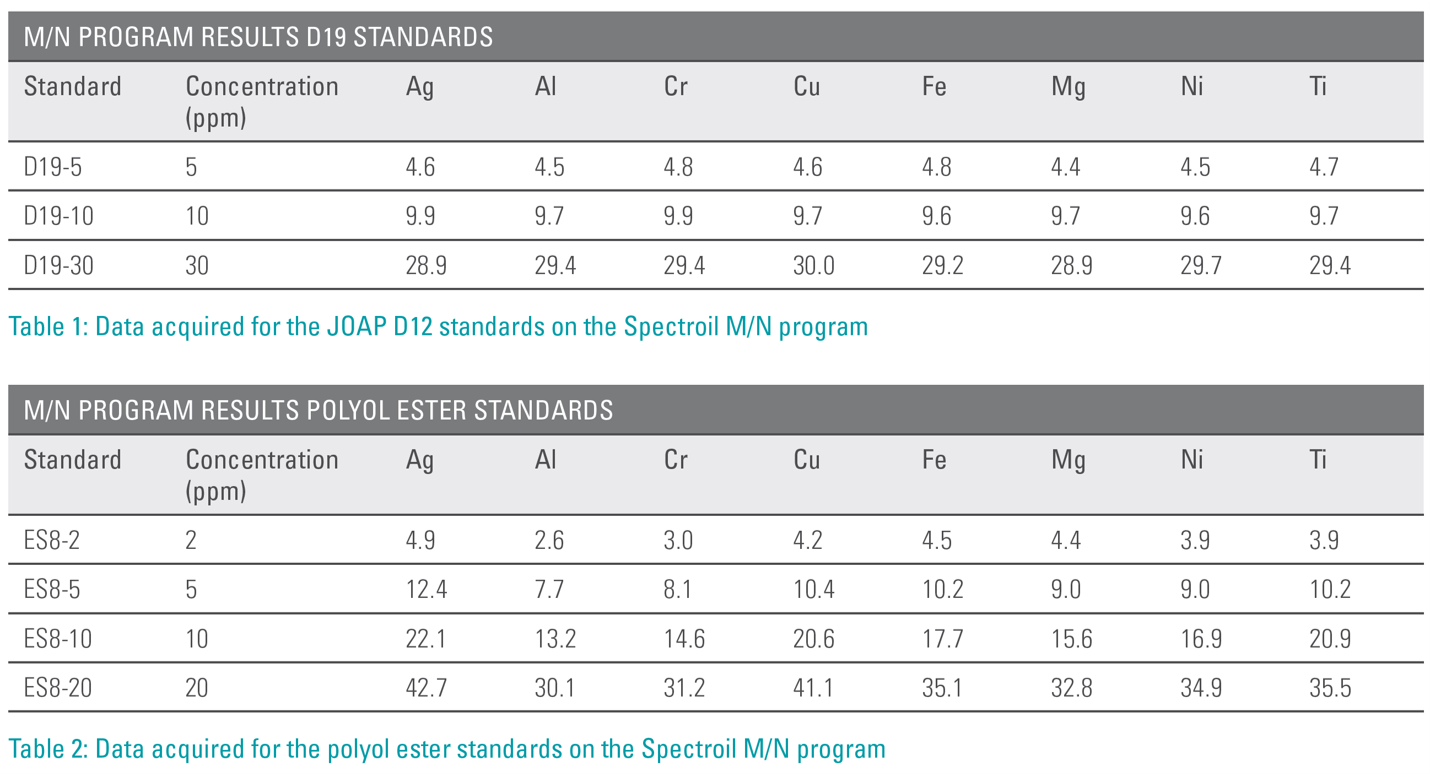 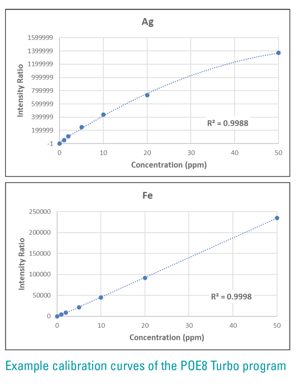 In order to improve the accuracy of the SpectrOil on polyol ester fluids, a new calibration called POE8 TURBO was developed specifically for this matrix. An oil matrix for the calibration standards was first developed using the Turbonycoil 13B fluid as a base. Different formulations were tested until one with ideal stability an accuracy was developed. Using the new calibration fluid, standards of 0, 1, 2, 5, 10, 20 and 50 ppm with 8 different metals were created.

Analytical lines for each element were then chosen by studying the LOD and repeatability performance of multiple options. The standards were run on the SpectrOil and the calibration curve for each element was created. All elements showed a strong linear or polynomial response with r2 values greater than 0.99 for all elements.

Once the POE Program was setup and calibrated, the samples that were originally run on the M/N program were re-run on this new program. All 4 samples showed a significant improvement in accuracy across all metals. Results are shown in Table 3 below.

For certain applications using polyol ester fluids, the alarm point for most metals being measured are below
10 ppm. This means that LOD is a critical performance criteria for the POE8 Turbo program. The LOD for each
element was determined by measuring 10 blanks and are listed below: 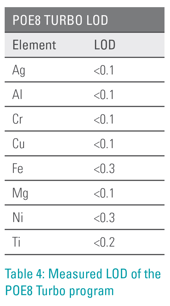 When performing elemental analysis on the SpectrOil it is generally sufficient to use the standard mineral oil
based calibration programs for analysis. However, certain fluids such as polyol esters require a matrix-specific
calibration to obtain accurate measurements. The new POE8 Turbo program can easily be added to any SpectrOil
during factory calibration for use in measuring polyol ester based fluids and has proven to provide improved
accuracy that is required for this analysis.