Rapid Analysis: Gold Mine Eliminates Reliance on Outside Lab

Point of care solutions provide the maintenance team with accurate answers about equipment when needed. This is especially important when teams are working in 24/7 operations. Waiting for data to come back in days or weeks to make important decisions is not viable.

Oil analysis is essential to identify problems so they can be corrected before they cause equipment to go down for major repairs. A multinational mining firm was using an outside lab for oil analysis, but there were some real limitations with this approach:

They overcame this problem by creating an in-house lab based on the SpectrOil 100 rotating disk electrode (RDE) atomic emission spectrometer and the Spectro FTIR oil analyzer. The mine can now obtain oil analysis results in only 12 minutes, and the reduced cost per sample has made it possible to increase the number of samples analyzed by nearly a factor of ten. In its first year of operation, the in house lab has identified savings of over a million dollars in downtime and over a million dollars in repairs with several of the larger incidents generating savings that completely paid for the purchase price of the instruments.

Protect the most valuable assets: Heavy equipment is critical to operation of mines.

A low-grade surface mining operation depends upon huge and expensive equipment designed to quickly and efficiently move massive amounts of ore, such as Hitachi 5500 shovels and Caterpillar 793 haul trucks. The Hitachi 5500 excavating shovel which has a maximum payload of 280 tons and is powered by a 2600 horsepower engine. A Caterpillar 793 haul truck weighs 270,000 pounds and can haul 250 tons of ore. This truck is powered by a 16 cylinder, 2478 horsepower engine.

Realize the value of oil analysis: Downtime can cost $15,000 per hour, repairs are expensive, and machine failure can have safety concerns. 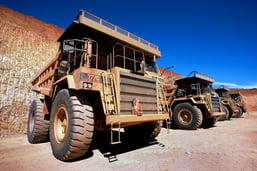 Oil analysis has long been an important part of maximizing uptime and minimizing repair and replacement costs at the mine as well as the vast majority of other major mines in the world. It takes only a few minutes to analyze an oil sample and the cost is low, so oil analysis is a simple and practical way to keep a mine operating successfully.

Wear tests measure the amount of various metals in the oil, providing a fast and inexpensive way to gauge the amount of wear in the machinery. Chemistry tests help determine the condition of the oil by measuring solids formed by oil oxidation and the viscosity of the oil. Contamination tests can detect water, fuel, or coolant contamination.

These large pieces of equipment are worth approximately $15,000 per hour when operating, so minimizing downtime is critical to profitability. Repair costs are also enormous with, for example, the cost of rebuilding an engine running about $400,000. More importantly, the sudden failure of a major system in heavy equipment like a truck or shovel could create a serious safety issue.

Take control of monitoring equipment condition: Establishing an in-house lab is easy and results are immediate.

In the past, the mine performed some analysis itself with a very basic tool, but its lack of reliability meant that the company primarily used an outside lab. The outside lab provided reliable data, but it took two days to ship samples to the lab and another two days for the lab to return results. As a result, it was not uncommon, that by the time the mine received information indicating a problem, the equipment had already failed. This situation resulted in downtime and repair costs substantially higher than would have been incurred if the repairs had been made a few days earlier.

“I got management approval to establish an in-house lab and spent over a year looking at different technologies and brands,” said the reliability centered maintenance (RCM) coordinator for the mine. “I concluded that Spectro stands far above the rest both in performance and cost of their instruments. For example, with other instruments the sample has to be pumped through the machine and flushed out, creating the potential for cross contamination. The SpectrOil 100, on the other hand, has a disposable wheel that avoids this potential problem.” The mine also uses the SpectroTrack laboratory information management system

(LIMS) to automatically capture analysis results from the instruments and store them in a database where they can be accessed over the Internet and used to track trends. When a lab tech emails the RCM coordinator to alert him of a possible problem, he immediately logs into SpectroTrack and checks the history of the machine and other similar machines to help determine the best course of action.

The mine’s in-house lab has already identified four problems, each of which would have cost more to fix than the entire cost of outfitting the in-house lab if the mine had waited for an outside lab to identify them.

“For every engine we save, we pay for the cost of operating the lab for an entire year, including the depreciation on the instruments,” the RCM coordinator concluded. “We have already saved four engines in 18 months of operating the in-house lab, not to mention many other cases where we have had smaller but still substantial savings. The in-house lab is superior not only in providing faster results but also in providing results at a lower cost – about 12 cents per sample – which has made it possible to increase the number of samples we are able to analyze to about 50 per day. Finally, we are also saving a substantial amount of money on oil changes because the analyzers tell us exactly when an oil change is needed. With hydraulic shovels that use 1500 gallons of oil at a cost of $3 per gallon, these savings add up. All in all, in-house oil analysis has provided substantial savings in downtime, equipment repair costs and oil costs that have been paid back several times over in only 18 months.”