If you are at sea for weeks or months at a time, it is not practical to send oil samples to a third party laboratory. Waiting until you reach port is not an ideal solution, as machine condition and oil condition can change dramatically while out at sea. Oil test kits containing volatile and corrosive chemicals are difficult to manage and create hazardous waste, which must be stored and disposed of properly. Portable, solvent-free, intuitive oil analyzers are the ideal solution for maintaining marine fleets in prime operating condition. This article written by Daniel Walsh, Director of Product Management, describes some new options available to marine fleet maintenance personnel. 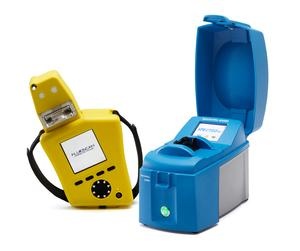 “Spectro Scientific, an ISO 9001:2008 company, specializes in analytical tools and software for machine condition monitoring. It has been one of the largest suppliers of oil and fuel analysis instruments to the marine and military segments for the last 20 years. Portable oil analysis tools are important to marine fleet maintenance managers, who are trying to do more with less, have small engine rooms in which to test and must adhere to changing environmental rules. The new technologies incorporate handheld tools and marine lubricant know-how within a solvent- free kit. These portable tools give operators the information needed for immediate decisions. Here are some examples of fleets that are embracing the approach:

In 2011, Spectro Scientific’s FluidScan was recommended by a US Navy chief engineer, based on his experience using the device on board a ship for approximately one year. Compared with traditional systems, FluidScan provided the following benefits: superior ease of use, increased equipment performance, and lower cost of ownership. A detailed ROI analysis revealed that for a fleet of 90 ships, the cost savings of hazardous chemicals alone is more than US$250,000 per year. It also eliminates the hassle of logistics for transporting, storing, handling and recycling the solvents, and the time and cost involved in employee training.

A companion product for solvent-free viscosity testing, the SpectroVisc Q3000, provided the key test package needed for lubricant condition on board ship.

Following the release of the SpectroVisc Q3000 portable viscometer, the United States Coast Guard (USCG) acquired the combined solution. A key reason the combination kit made sense for the USCG was the size of the toolkit, an important consideration for the new class of Fast Response Cutters (FRC), which employ two 300kW (5000 HP) engines on an 87m (154ft) ship. The technology significantly simplifies the logistics of oil analysis and provides real-time oil condition information to crew members for maintenance of assets on board marine vessels.

Cruise ships see opportunities to adapt the technology as well, particularly as they deal with fuel switching per the latest MARPOL VI SECA (Sulfur Emission Control Area) zones. In July 2013, a newly constructed cruise ship implemented the portable infrared analyzer for shipboard oil analysis. The cruise ship is the newest member of a popular cruise fleet that accommodates 3,000+ passengers with exciting new features. The ship completed its first Mediterranean cruise in June. A FluidScan Q1000 was purchased for on board oil analysis testing. Several FluidScans have been used in other sister ships for more than three years, with good results.

The ship is equipped with 2 x 14 and 2 x 12 cylinder engines. A comprehensive asset sampling profile was developed. Each engine has a filter system, lube oil purifier and alternators. The propulsion group covers the main bearing, thrust bearing, shaft bearing and intermediate bearing on two shafts. The ship is also equipped with multiple thruster units, at the bow and at the stern. The steering and stabilizer units were also added as assets. As they continue on their next voyages, the engineer plans to add more assets to the current layout.

The FluidScan contains built in libraries with many fluids already preloaded. For many of the assets, the client uses the Mobil Guard 440, which can be added to the fluid library on the analyzer, which was expected as the ship was in the harbor for 36 hours at that stage and the purifiers were not running. The condition monitoring routine then started, by collecting samples from various assets in preparation to sail early the next day.

Larger ships realize benefits too. The Polar Star used by USCG is one of the world's most powerful non-nuclear ships. USCG implemented on-site oil analysis using the FluidScan infrared analyzer. The analysis was chosen to support USCG’s 75,000 shaft HP gas turbine and 18,000 shaft HP diesel electric plants while the ship undergoes Arctic ice trials. An attractive feature of the handheld analyzer is its solvent-free design, which is ideal for areas where logistics are hard to attain. It is also useful because of the ease in storing and offloading results for review by USCG command in Baltimore, Maryland.

One of the larger ships, the USCG Waesche, used the FluidScan to detect a serious water ingression problem into a 3,000 gal oil tank on board ship. The FluidScan detected a water problem, and according to the USCG lube oil program manager, the issue was detected in time to avoid a major oil change. The cost of replacing the oil would have been over US$50,000 and the ship would have been unavailable for duty in the Pacific sea lanes if the predictive maintenance tool had not been used.”