A large municipality located in the northwestern United States operates a fleet of over 1,700 vehicles and over 3,000 pieces of motorized equipment which it uses for critical everyday functions.  As you can imagine, maintenance on this equipment is expensive with oil changes alone costing in excess of $3 million dollars annually when done at set intervals.  The municipality recognized that they could save millions of dollars by using oil analysis on their fleet to extend oil change intervals as well as identify and fix serious problems before they cause a catastrophic failure.

The municipality originally began by sending off oil samples to an outside lab for oil analysis.  They achieved considerable savings but quickly came across the following issues:

Due to these issues, the Operations Manager of the municipality felt they could benefit further by owning and operating their own instrumentation on-site. 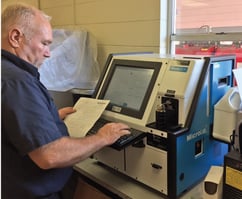 After researching the leading oil analyzers on the market, the municipality selected the MicroLab® lubricant analysis system from Spectro Scientific for their on-site oil analysis program.  They decided on the MicroLab® because of the instrument’s ease of use and its ability to automatically complete multiple analyses in under 15 minutes.  Once the MicroLab® was deployed, the municipality immediately began to recognize the following benefits of on-site analysis.

The experience of this northwestern municipality demonstrates that oil analysis can generate a fast return on investment for any organization with a large fleet of vehicles and equipment.  They were able to maximize their cost savings by moving their oil analysis on-site in which the cost and speed of analysis allowed technicians to evaluate more vehicles and take immediate maintenance action.