Guide to Measuring Particles in Oil

Particle counting is a critical aspect of any machine conditioning program and
there are many tools out there available to monitor and track the quantity and
severity of the contamination, be it due to external contamination or machine
wear. 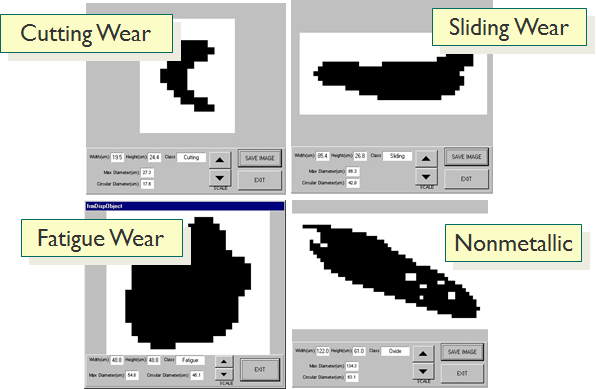 The specific application and type of particles will often govern what is the
best particle counting technique for the job at hand. The continuous cleanliness
of a hydraulic system, for instance, is very critical and even very low levels of dirt
ingress can clog actuators and valves leading to premature failure. On the flip
side gear and transmission systems with lots of moving parts coming together
will be able to tolerate many more wear particles than a clean hydraulic system.
What techniques are available?

■ LIGHT BLOCKAGE PARTICLE COUNTERS
Laser light blocking particle counters, or optical particle counters (OPC’s) are the traditional instruments used for in-service oil analysis. The working principle of traditional light blockage particle counters is depicted below. A light source, typically a laser, passes through a sample. The light is partially blocked by particles so less light reaches the photodetector array, resulting in a change in voltage proportional to the area of the particles. The photo detector technology is the same principle used in garage door openers.

Traditional light blockage particle counters have several inherent design limitations. The photo detector results contain measurement errors caused by the presence of water and air bubbles within the oil sample. Properly preparing your sample by using ultrasonic agitation helps reduce the impact of air bubbles on particle count. For water containing samples (an oil sample that is ‘milky’ contains water), it is common to need 'water stripping’ solvents to get a more accurate count. The presence of water results in a significant error in the reported particle count.