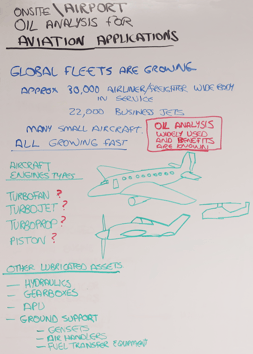 When talking about aviation assets one asset stands above the rest - the aircraft. There are approximately thirty thousand airliners in service today, used for both passenger and freight transportation.  This number includes hundreds of thousands of individual small aircraft.  Today, all of these fleets are growing quickly as the need for air travel continues to increase. Oil analysis is widely used in the aviation industry and has been for many years because the benefits are well understood. Large planes, smaller planes, and even helicopters are all considered aircraft, and a few major lubricated assets are critical to these aircraft. One of these assets is the engine. Engine types have various designs such as turbofans, turbojets, turbo props, even piston engines. The majority of them have similar lubricants, but different lubricants exist depending on the specific application. Other types of lubricated components in an aircraft consist of hydraulic systems, gearbox systems and APU's (auxiliary power units). There are also a lot of ground support equipment types supporting the aircraft before it gets in the air, including gen sets, air handler systems or fuel transfer systems.

One of the key challenges for the aerospace industry is maintaining high performance for fleet safety. Carbon 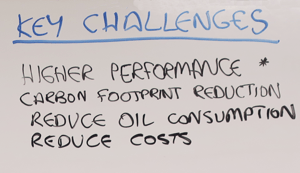 footprints and oil consumption reduction pressures are constant concerns, as well as reductions in cost. Oil analysis has been used for many years to identify wear issues as well as reliability concerns. On-site oil analysis is being considered now more than ever because it can help in each of the previously mentioned areas. One reason is on-site oil analysis can be done within minutes, not hours. The technology today is sensitive to extremely small trend changes or moves in the trend. This is critical because of the unique aspects of aviation and the attention to minute changes that may indicate early warnings.

The United States Air Force (USAF) has been conducting on-site oil analysis for many years. They have one of the largest on-site oil analysis programs in the world. It falls under the  Joint Oil Analysis Program (JOAP), and well over 25 million samples have been tested since the program began. The USAF has an extensive database and the rules/diagnostics are well understood and published. Many global militaries do on-site oil analysis as well as several commercial airlines and aircraft maintenance centers that support fleets. What's unique about on-site oil analysis or aviation analysis, is that it accounts for some of the unique conditions specific to aviation applications specifically engine types. 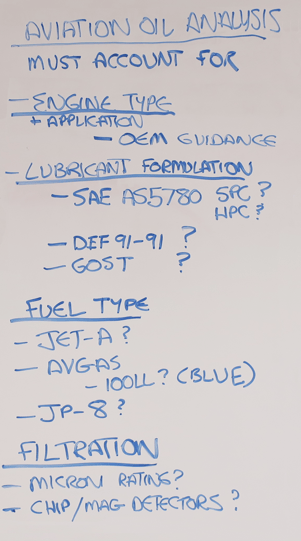 The original equipment manufacturers (OEMs) of those engines are heavily involved in guidance, not only at the warranty phase but after the warranty phase because of  continuous requests for involvement throughout the life of the systems.  The OEM guidance is critical because if there are any accidents, there has to be traceability to investigate the cause. Lubricant formulation is also something that has to be considered when dealing with aviation oil analysis. Aviation lubricants is unique in that its governing body is not so much ASTM but the SAE or Society of Automotive Engineers. Their technical committees bring the engine manufacturers, airframe manufacturers, oil companies, and the aviation authorities together to agree on certain standards for safety and for reliability. One of the major umbrella standards out there is the SAE AS5780. It is a widely used standard for turbofan and turbo engine applications. It refers to lubricants that are often hindered by ester basestock or fully synthetic fluids. Many of them are used for gearbox applications as well. There are two different duty cycles.

The typical duty cycle is called standard performance capability, and as the industry moves towards higher performance requirements, they're looking for higher performance than capability; which essentially is looking for greater temperature and longer lr oxidation resistance. Other international standards followed in this market are the UK standard DEF 9191, Russian GOST standards and Japanese standards as well. Lubricant formulation guides and standards compliance are considerations as are the fuels used in aviation applications. The majority of wide-body airliners employ  gas turbine based engines, combusting a kerosene based type of product, such as Jet-A or JP8 for military applications. However, for piston engine applications, AVGAS is a variant that is still widely used. It is similar to a gasoline blend. One example being 100 LL, which is low lead. It is a leaded gasoline with antiknock compound and widely used in the piston engine applications. Something else to consider is the filtration that is used on an engine. Because these filters are very high performing with high efficiency micron ratings, and they have chip detectors  included in the engine for safety purposes.

Aviation hydraulics are also another area of concern for oil analysis. The hydraulics need fire resistance for prevention of fires resulting from any accidents. Phosphate esters are widely used in those situations, since they're designed for specific applications and typically don't do well outside of that application. Seal performance is also considered,  but what you don't want to have is mixing these hydraulic fluids by a mineral base with a phosphate ester.  You also have to concern yourself with coolant and dilution getting in or debris ingression.

Some of the key things to watch for are trace wear metals, contaminants, and additives. They are widely tested throughout the entire industry. Testing is performed using elemental analysis by atomic emission spectroscopy. That can include RDE, ICP, and the testing can include a variety of different techniques. Testing is important because it's looking for early signs of adhesive fretting wear or abrasive wear as well as contaminant ingression and the additive package in the oil. What's unique to aviation is that the alarm limits are extremely low. For example, one may have a condemnation limit of 1.5 ppm for chromium. Typically zero is the ideal. There will often be a combined alarm system or something similar to, "six parts per million for a combination of chrome copper nickel iron combined", where the number must not reach the limit. It is another metric for having an extremely low number.

Course wear debris is another tested parameter. The industry is aware that spectroscopy has limitations, and the types of wear occurring may not be detected by very small wear debris. In that situation, anything greater than five microns will usually be a requirement. There are variety of methods for wear debris analysis. It is often known as filter debris analysis and can be measured by x-ray fluorescence spectroscopy, microscopy (either optical or scanning electron microscopy), and direct imaging particle count. However, because it's qualitative, a skilled diagnostician is required to review the data. The test determines fatigue bearing wear, so sometimes there are certain wear conditions where a small buildup of particulate occurs. Other times, a large burst of particulate occurs all at once. Fatigue wear is an example of a unique particle burst generation event, followed by little to no follow on debris before seizure.  There are two or three body abrasive wears, which large particles produce quickly. Morphology is very helpful in aiding the root cause analysis. In this industry, OEMs have a very distinct, detailed information available to the end user. When they talk about guidance on diagnostic documents, they focus on the size, shape, morphology and alloy content, and engine ISO codes generally are exceptionally clean for this. It is not unusual to see 14/ 12/ 10 and below for a collective amount of particulate with specific focus on alarms that are ferrous or metal based.

Cleanliness, fluid degradation, and fluid contamination are other properties needing attention. Cleanliness involves looking at overall particle count and the general cleanliness level. This is particularly important for hydraulic systems as well as some main engine applications. Laser or direct imaging ties to ISO 4406 or NavAir Codes in those situations. For fluid degradation, look at oxidation by infrared and total acid number. For fluid contamination, look at water coolant, deicer fluids or fuel dilution issues. What's important is looking for overall contamination and fluid degradation concerns. The aviation industry is unique in that valve clearances are extremely small and the overall pressure of the systems range anywhere from 3,000 to 5,000 psi with exceptionally clean requirements. In the case of the contamination of the oil or degradation of the oil, worry about premature stress on the oil and coking or hot spots that occur in the engine. Electrical conductivity issues are important. If the additive is not correct or a change occurs, there may be an increase or a sensor/diode that's short-circuiting, that causes problems with the oil, and can be picked up with the infrared.  Oxidation values are very low and there is a very small change for acid number. There is also something called alien fluid.  For instance a fire resistant fluid gets added into a mineral base fluid or ester base fluid or vice versa. That type of mix-up will cause slugging and will cause a miscibility issue, which can lead to problems when the aircraft is in flight. In the case of the liquids getting into the system, worry about leak detection. If things like glycol or deicer are present, it could be because of leaks. And, there could be a breather malfunction getting into the fluid systems. Those are very important things to think about. Deicer fluid can affect the corrosion inhibition, and if water becomes present in the system, it’s never a good situation. It could indicate moisture coming into the system, and cause ice buildup in flight as well as blockages. Last but not least, look at fuel dilution in hydraulic systems because the fuel is actually used as a coolant for the engine. If there are any integrity issues, fuel may get into the hydraulic system.

The suggestions for on-site analysis for aviation applications are as follows: Investigate the MiniLab solutions, such as the Minilab 153 or the MiniLab EL 123 system with  TruView 360 software.  This allows you to develop your own alarm limits and diagnostic systems. For military applications, consider the FieldLab Series, which have XRF wear debris detection for large debris.